Increasing educational involvement of students is one of the core services which the Board of European Students of Technology (BEST) provides to students from all around  Europe. With their vision of Empowered diversity and their mission for Developing students, BEST organizes many projects, amongst which are BEST Symposia on Education (BSE).

The Symposia were created with goals to involve students in the process of educational improvement and raise students’ awareness about education matters. In these events, students discuss a variety of education-related topics, together with other stakeholders involved directly or indirectly – professors, experts, company representatives and other higher education decision-makers. Each year, BEST chooses the most relevant topics in STEM education, and organizes multiple Symposia. As their final outcome, students’ opinions are gathered into the reports and disseminated though papers in conferences, as well as shared with the educational and scientific community across Europe.

This year’s topic was none other than Diversity in STEM Education. It is evident that there is an ever-growing need for achieving diversity in all aspects of one’s life. However, with many benefits, there are many challenges needed to be overcome. The topic was approached from several different aspects, divided into four different Symposia, organized by which happened in the summer of 2019: in Athens, Skopje, Brno and Aveiro. The formats of the sessions were numerable, consisting of group or panel discussions, International Cafés and other interactive workshops. The events aimed not only to identify but also to engage students in the problem-solving process. One of the added benefits was developing participants’ skills, such as Project Management, Time Management, Creative Problem Solving and many others. 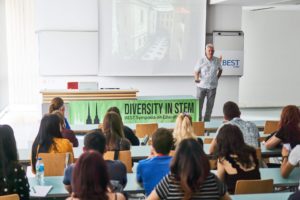 The main topic of the BSE Athens was Cultural Diversity. The event was held at the National Technical University of Athens, and it started with a panel discussion about Diversity in STEM, where different professors and education experts shared their experiences regarding diversity and its importance in STEM education and research. The most prominent topics which were discussed include the segregation of foreign students, language barriers in both students and teachers, as well as the differences between eastern and western European universities in terms of educational systems, openness and preparation to embrace cultural diversity. There were also sessions aimed to gather input on whether the exchange programmes are using their full potential, and what may be the reason behind it. As the final outcome of the event, participants created a framework that would enrich cultural diversity in universities. 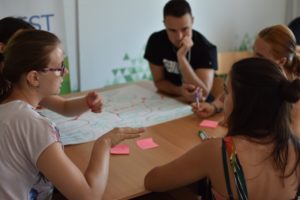 In BSE Skopje, organized at University “Ss. Cyril and Methodius”, the focus was set onto the Racial and Ethnic Diversity. The participants firstly shared their personal experiences regarding this aspect of diversity in their universities, in order to identify norms and problems that were later on tackled in solution-oriented sessions. The discussions were held regarding European demographics and minority representation in universities, as well as racial and ethnical discrimination, which was followed by a debate on the relevance of diversity in Higher Education. Students were also discussing their personal attitude towards diversity, unconscious biases and their origin, as well as their professors’ teaching methods, focusing on their level of inclusiveness, teachers’ general approach to students and inclusive pedagogy, as a teaching method to empower learning in diverse environments. Some of the most relevant outcomes which were gathered came from sessions about mobility programs, integration techniques, social responsibility as well as the role that universities, companies and governments, as institutions, have in shaping this future. For their final project, with the goal to empower our participants to work on changes they want to see, students were asked to develop a student initiative which could be implemented in their university and would empower diversity.

Finally, in BSE Aveiro, the main topic was Gender diversity. The event was held at the University of Aveiro, and each of the working days had one main focus. Starting with the general introduction to some concepts and ideas in diversity, students continued to build upon topics such as gender diversity in students’ day-to-day life, cultural effects throughout their lives to unconscious bias and the situation in their own universities. A notable topic was gender discrimination in universities and professional careers, and additionally, participants had the opportunity to get in contact with companies which collaborate with the University of Aveiro. After identifying the problems, the following sessions aimed to create solutions, from the perspective of all stakeholders – universities, companies, government and students.