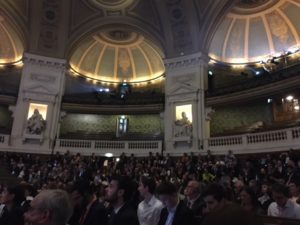 The 20 years of the Bologna Declaration (signed as the “Sorbonne Delaration” in Paris in 1998 !), was celebrated at the Sorbonne in Paris on 23 May 2018. All the invited guests (for SEFI, F. Côme, Secretary General), had the opportunity to attend a ceremoay at the Sorbonne grand Amphitheâtre where they listened presentations given by the Rector of Paris, professor Gilles Pécout, as well as by Madame Frédérique Vidal, Minister for Higher Education, Research and Innovation. Presentation of innovating processes illustrating the key concepts fo the Bologna process were also presented.

Then, the Ministerial Conference took place at the Palais Brogniart on 24-25 May. It was opened to registered European Higher Education Area (EHEA) delegations and included a Bologna Policy Forum that was an opportunity to pursue a dialogue between EHEA and non-EHEA countries (Remember, the European Higher Education Area includes 48 countries centering on the European region, and stakeholders such ESU, EUA, the European Commission, the Council of Europe, the representatives of employers… and aims at increasing the mobility of students and staff thanks to common concrete tools such as ECTS, structuration of the studies into three cycles and quality assurance of higher education. The Paris 2018 Ministerials conference was an opportunity to reinforce the cooperation between countries for a better future of higher education and the Paris  Ministers’ Communiqué stresses the necessity to improve the implementation of fundamental values, especially democracy, since the standards of higher education convey notions of peace and freedom! Read the Paris Communiqué, the Paris Statement and their appendix on http://www.ehea2018.paris/

The event had been preceded by a Magna Charta Observary workshop on “Integrity: a cornerstone value for Higher Education and research, held at Conference of University Presidents.  The workshop aimed to understand the challenges posed by integrity in terms of research and training and to explore measures to promote it for universities and national systems.