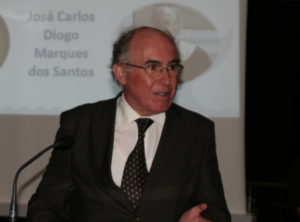 The SEFI Leonardo Da Vinci medal has been awarded to Portuguese Professor José Carlos Diogo Marques dos Santos,  former Rector of the University of Porto, for his outstanding contribution to engineering education, which has had an international significance.

The awardee has been the first Director of the 5 year Programme on “Informatics Engineering” of the Faculty of Engineering of University of Porto (1994 – 2001), was deeply involved in the design of two MSc programs at FEUP and in several revisions of the Programme in “Electrical Engineering and Computing”. He has created from scratch two laboratories at FEUP: Digital Electronics and Image Processing.

He has been the chair of the committee for evaluation of all the “Informatics for Management” Programmes of Portuguese Universities and Politechnics (2001/2002). Furthermore, he has been National (Portuguese) Delegate to ESPRIT Programme of the European Commission during three years. He has been National Representative to the “Expert group on research infrastructures” of the European Union (October 2001 till February 2002).

Presently, after retirement in the 1st of July 2014, he is cooperating with the The Faculty of Engineering of University of Porto and with a research Institute called INESC TEC to create and run an applied research Laboratory in Added Value Manufacturing, based in a Learning and Innovation Factory.