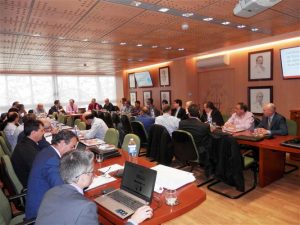 Prof. Luis Manuel Sánchez Ruiz, SEFI Vice President, was invited by Prof. Juan José Domínguez, Director of ESI at Universidad de Cádiz and President of the Spanish Industrial Engineering Deans Council (CDTI ) to the Plenary Assembly of CDTI on 6th April 2017 in Madrid (Spain) at the General Council of Official Industrial Engineering Colleges (COGITI).
CDTI was considering to join SEFI as an Associate Member and wanted to receive firsthand information. LMSR presented the SEFI and its numerous activities focusing on Position Papers, Working Groups, SEFI Annual Conferences and ECED which is an relevant event for the European engineering deans and which is organised jointly by SEFI, CESAER and the local host every year. Special attention was given to the upcoming Annual Conference in Terceira and the last ECEDs held in Valencia 2015, London 2016 and Munich 2017. Enrique Ballester, Director of ETSID at Universitat Politècnica de Valencia (Institutional Member of SEFI) and Vice-president of COGITI also presented the advantages of joining SEFI as an institutional member for each participating institution. The participation of SEFI VP in the Assembly was appreciated and COGITI decided to join SEFI.