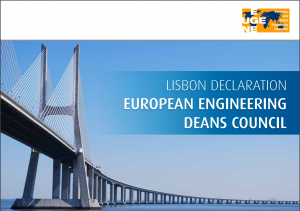 On September 27 2011, leaders of engineering education from Higher Education institutions converged to Lisbon from different European Countries to create the European Engineering Deans Council (EEDC).
On this occasion, they signed the so-called “Lisbon Declaration” confirming their commitment to pool their collective strenghts for the advancements of engineering education and research for the benefit of Society and to pursue the establishments of links with similar international organisations that are committed to the same objective worldwide.

FROM THE DECLARATION TO A LEGAL ENTITY

The creation of the EEDC aisbl has been undertaken in the context of the EU “EUGENE” LLP Project (2009-2012) financed by the European Union and managed by the International Office of the University of Florence/School of Engineering. It resulted from the work of SEFI – European Society for Engineering Education – and ISEL – Instituto Superior de Engenharia de Lisboa-, in the frame of the EUGENE Transversal Action 2 (www.eugene.unifi.it).